There are ways to break the habit of saying yes and get your life back, without giving up your career goals.

When did “no” become a four-letter word? It seems like only yesterday when Nancy Reagan was on a very special episode of “Diff’rent Strokes” to talk to Gary Coleman about the virtues of saying no. (Those were the days, eh?)

If only the former first lady were around today to speak with today’s working professionals about just saying no at work. In addition to steering them away from drugs, she could also advise them to steer clear of taking on extra work, which (not unlike drugs) can so often take a toll on workers’ stress levels and productivity.

Despite their already full workloads, tight deadlines and packed schedules, many working professionals have a hard time saying no, for fear of missing out on opportunities and damaging their professional image. Contrary to popular belief, however, saying no doesn’t have to be a bad thing. In fact, it can be incredibly empowering, says Scott Fetters, founder of High Five Digital Marketing.

“Saying no is your battle shield for deflecting distractions, staying true to yourself and sticking to the course,”Fetters writes.

Not to mention that it’s also one’s right to say no. Saying no, however, does not come easy -- especially in the workplace.Women in particular have a hard time saying no -- perhaps due to a learned habit of trying to please everyone or an inherent fear of hurting other people’s feelings. Fortunately, there are ways to break the habit of saying yes and get your life back, without giving up your career goals. 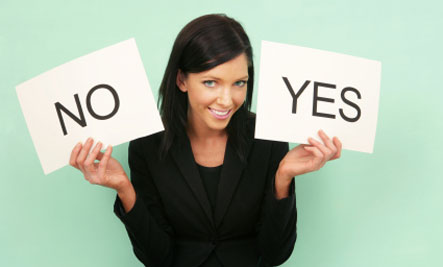 Six ways to say no at work and still get ahead:

1. Shift your mindset. Don’t think of saying no as giving up or giving in. Look at it as a way to free up time for what’s truly important to you. “Some of us have a hard time saying no because we hate to miss an opportunity,”says HBR’s Peter Bregman. But saying no isn’t about missing an opportunity -- it’s about making a choice and opening yourself up to a different opportunity.

2. Take pride in saying no. Many people hesitate to say no for fear of losing respect from colleagues or their manager, when in reality, saying no can have the opposite effect. Saying no “shows you have a vision, a plan and an opinion,” Fetters says.

3. Be clear. One of the reasons women hate to say no is fear of hurting someone else’s feelings. But when you say no, you’re not rejecting that person -- just the request. So be clear and explain -- honestly -- why you’re rejecting the request.

4. Don’t feel guilty. Remember: You have a right to say no. Don’t feel guilty for saying no. After all, if you say yes to work and you don’t have the time, resources or energy needed to produce a quality result, isn’t that more unfair to the person whose request you’re accepting than saying no?

5. Choose the right words.When saying no, use the phrase “I don’t” instead of “I can’t,” which research shows is a more effective way to say no. As Heidi Grant Halvorson, director of the Motivation Science Center at Columbia University, explains, “‘I don’t’ is experienced as a choice, so it feels empowering. It’s an affirmation of your determination and willpower. ‘I can’t’ isn’t a choice … [It] undermines your sense of power and personal agency.”

6. Know when to say yes.Say yes only to the projects you truly want to take on, says career expert Lindsay Olson. “Before you say yes to something,” she suggests, “pause a moment and ask yourself whether this is truly something you want to do, or whether you simply feel obliged to say yes to it.”

Today, child welfare workers are on the front lines of the fight to prevent child abuse, seeking a happy and healthy outcome for everyone in the family or community. Social workers, foster care specialists, case managers and child protective specialists are just some of the professionals working every day to make sure children live in well-adjusted and competent homes. 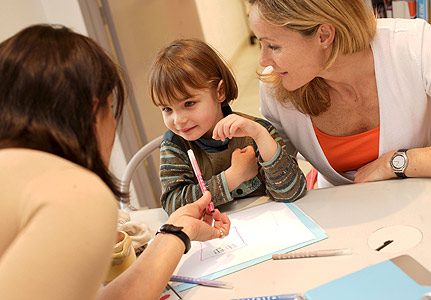 How to become a social worker
There are numerous career paths available for those who want to work in child protective services, and since abuse happens everywhere, any region or state may have openings. One of the most common routes to this profession is becoming a social worker.

Social workers work closely with children and their parents to help them cope with problems in their lives. Child and family social workers wear many hats -- they help parents find resources they need, step in when a child is being abused, arrange foster families or adoptions, and help families deal with a variety of issues, from mental illness to divorce.

Social workers must possess at least a bachelor's degree in social work or a related field to begin entry-level work. A bachelor's prepares graduates for direct-service positions, such as that of a case worker. To make sure certain students are ready for that responsibility, social work programs often require students to complete an internship or field work prior to graduation. Those who want to work in schools or health care typically need a master's degree. Clinical social workers must have both a master's and at least two years of supervised experience in order to move into private practice.

All states require social workers to be licensed, and there may be additional requirements for those who work in child welfare, depending on the state or local area. According to the Bureau of Labor Statistics, demand for child and family social workers is projected to grow 15 percent nationwide from 2012 to 2022.

Other careers in child protective services
There are many other positions in the field of child welfare. A child protective specialist, for instance, responds to reports of abuse or neglect, conducting interviews and home visits to investigate the issue and then taking the appropriate actions to ensure the safety and well-being of the children in question. Family case managers oversee children who have been removed from the home and placed in a safer situation, all while working toward the goal of family reunification or successful adoption of the child. Access and initial assessment specialists take the initial reports concerning abuse or neglect, determine whether the child is in immediate danger and alert the appropriate authorities as needed.

There are also those who work in supporting roles, providing assistance or counseling services to parents, children and communities going through difficult times. Careers such as community health worker, family therapist, school counselor, social service assistant, behavioral counselor and rehabilitation specialist are just a few of the many possibilities for those who want to help alleviate the problems of child abuse and neglect.

The challenges and rewards of child welfare work
Those who work in child welfare face unique challenges. According to the Social Work Policy Institute, the emotional toll on child welfare workers can be very high, leading to quick burn-out and high turnover rates in the field. Caseloads are heavy, and the time required for the job often surpasses the usual 40-hour workweek. However, studies have shown that those well-trained for the job, especially those with higher degrees in social work, are more likely to stay with the profession for the long haul.

Despite the challenges, those who work in child welfare provide a very valuable service. The Child Welfare Information Gateway reports that 3.2 million children in 45 states received prevention services from a CPS agency in 2012 -- proof that there is a strong line of defense against child abuse and neglect.

And for those who what to join the fight, a career in child welfare can be a great way to make a difference in the community.